‘Amongst the world religions, Hinduism stands as unique. Nowhere do we find such diversity of thought and practice. India has allowed seekers from all walks of life the freedom to experiment and express insights. It has provided the forum for Masters and saints to pass on their direct revelation of supreme Truth. Hinduism has provided spiritual sustenance of individuals at all stages of spiritual development. It has catered to people of all natures and temperaments. It is a religion, a culture, which has thought about every avenue of life. It is a culture which embodies unity in diversity…it has within it philosophies which describe the very metaphysics of our existence. It contains traditions which allow us to go deep and explore the ultimate meaning of life. It takes the one yearning for God to a place where one can taste His glory. This is why Santana-dharma is the eternal path for humanity.’ - Understanding Hinduism, pg 57

A Spiritual Path That Defies Definition

The Abrahamic faiths (Christianity, Judaism, and Islam) have created the Western definition of religion. Even within the various sects and branches of each of these faiths, there is a clear founder, foundational framework, and an easily identifiable set of key scriptures that hold the authority of their faith.

And it’s not that Hinduism lacks any of these things. It’s that we have a lot and it seems contradictory at first glance. Instead of one founder, Hinduism is host to millennia of saints and sages, Masters and avatars. Instead of a key set of scriptures, we have a library full. It would take multiple lifetimes just to read all of them once, let alone understand all of them. Devotees of a Hindu path may dedicate their lives to understanding just one of them. And in rejection of universal Truth claims, Hinduism is home to a broad spectrum of teachings explaining the nature of life, God, Truth, purpose, and more.

Within Hinduism, it’s easy to have two Hindu people who believe things that are paradoxical to each other and still be in line with the teachings of their faith. While this can seem overwhelming at best, the approach Hinduism takes demonstrates both the sheer logic of the faith and the beauty in the pursuit of unweaving life with the aim of having a direct, first-hand experience of the Divine.

are some who might argue that variety and diversity are a sign of confusion and chaos. But this variety is actually reflective of a sophisticated mature approach. Anything beyond reason and logic is inevitably going to be paradoxical and open to a number of interpretations. The ultimate mysteries of life cannot be encapsulated in one rigid idea. The glory of Hinduism lies in being able to simultaneously contain a number of paths and philosophies which guide the spiritual seeker to higher states of realization.’ - Understanding Hinduism, pg 7

Rather than focus on one understanding of Truth, lineages are created by saints and masters to pass down their realization of Truth and the practices they utilized to attain it themselves. At its core, Hindu philosophy is about dedicating your life to the first-hand realisation of the Truth.

A Spiritual Path That Holds Diversity in Unity

This all begs the question, how does Hinduism manage to hold so much diversity under one umbrella? If there’s so much variation, how is it all Hinduism rather than a multitude of separate religions? Hindus tend to abide by 7 universal truths. They may be understood differently but all are accepted and form the basis for exploration.

The seven tenets of Hinduism are:

‘The Truth is one, but the wise speak of it many different ways.’ - Rig Veda

This oft-quoted verse from the Rig Veda highlights this diversity in unity. There is one Truth but there are many ways of experiencing that Truth. Some will experience the Truth in Krishna, others in Devi, and others still will find it in Shiva. Underpinning it all is the inherent understanding that there are many ways to attain the Truth.

A Religion or Spiritual Path

In the West, we see religion as a rigid set of beliefs and practices one must abide by in order to be saved or achieve a pre-defined goal. Spirituality is seen as a free form engagement with anything of a spiritual nature but without rigid or dogmatic rules.

But in Hinduism, spirituality and religion are intricately connected and ultimately non-different. This is because, unlike most other religions, Hinduism is not based on one set of scriptures, one founding figure, or one philosophy. It is a pantheon of practices and philosophies passed down through realised Masters with an emphasis on direct, first-hand experience of the Divine.

Through experience and practice, followers seek out a path that speaks to them and appeals to their nature. According to the Mahabharata, a pivotal Hindu scripture, ‘Whatever is here can be found elsewhere; but whatever is not here cannot be found anywhere.’ Hinduism can then be seen as a religion that contains all spiritual ideas. 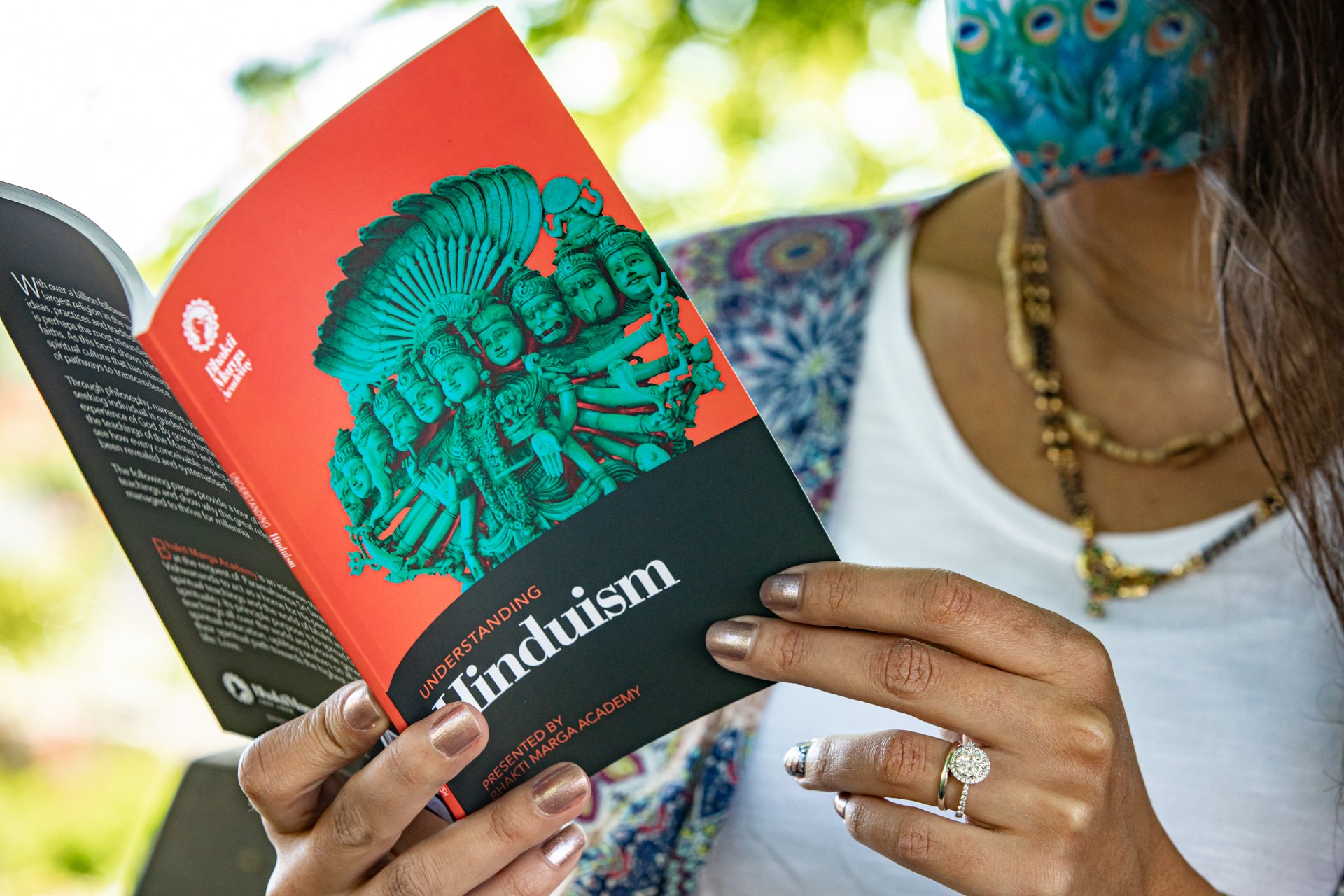 Through philosophy, narrative, yoga and ritual, the seeking individual is guided towards the first-hand experience of God. By going further and delving into the teachings of the Masters and scriptures, one can see how every conceivable aspect of spiritual life has been revealed and systemised.

The pages in Understanding Hinduism provide a tour of these teachings and show why this great religion has managed to thrive for millennia. Download your free copy today!

It might seem as a small distinction, but two different beliefs of personal and impersonal God allow.
09 August 2022
3 min read
Knowledge

Why You Should Read The Bhagavad Gita: Answers to Life's Problems

On the surface, the Bhagavad Gita is a story about a great warrior on a battlefield. In truth, it is.
10 May 2022
3 min read
Knowledge

To experience the ‘union’ which yoga infers in its own etymology, there are many methods. But it is .
20 April 2022
3 min read
See More Articles

BEFORE COMING TO VISIT PLEASE READ THE RULES read the complete guidelines.